skip to main | skip to sidebar

And now for something completely different...

0 comments Posted by cluelessvagrant at 5:37 PM 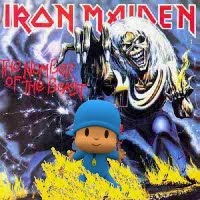 Just a work in progress, was channel surfing and the image just popped into my head. Worked on it for 30+ minutes on Paint.Net v3.5.5. You can still see some pixels from the red demon and I'm not quite happy with the flames...I had to cover up the ugly pixels around the edges...but still you can pretty much see what I'm going for.

Lucky Starr and the Oceans of Venus

0 comments Posted by cluelessvagrant at 9:26 AM

By Paul French, one of the most famous Science Fiction writers of all time. Admittedly written during a time when Venus was still a relative unknown, this book's Venus has a single global Ocean of carbonated water...I couldn't stop imagining dumping a tanker full of Mentos in that...where men live underneath the waves in fantastic domed cities cultivating advanced yeast cultures for food and export.

David Starr volunteers to investigate strange rumors of trouble brewing on Venus. Together with his sidekick, the Martian John Bigman Jones, they have hardly descended into the perpetual Venusian cloud cover when they are attacked by forces-unknown.

The story has our hero battling human controlled mind-controlling aliens controlling humans (let that simmer a bit and you'll get what I mean). The ending seems a bit weird for such a light story though; Starr decides that the mind controlling technique of the villain could be of some use to the Scientific Council which even I ( epimethean that I am) don't think sounds very prudent. I mean if one man was corrupted by that power, what would the possession of that ability do to a council of men who are supposed to be on a Cold War footing against another group of humans in Sirius.

Regardless, this is vintage juvenile science fiction. Very good stuff.

0 comments Posted by cluelessvagrant at 12:42 PM

I've actually read about 40 - 60% of this book before, it seems to be popular among editors to snip and prune some parts of this book to include in some anthology or other.

The basic story is this; America sends off 6 astronauts to the planet Alpha-Aleph orbiting around Alpha Centauri. The mastermind of the mission is Dr. Dieter von Knefhausen (of whom a German-er name there is none). So the Constitution, that's the ship, is supposed to take these 3 couples/astronauts/scientists/future colonists out to America's new hope in the stars. The trip takes quite some time to get there as may be imagined and Knefhausen has devised some activities for the crew to perform to relieve boredom. These activities are mostly "recreational" math problems only they're not recreational... *spoilers* they're actually the point of the whole trip, there is no planet Alpha-Aleph, it's all an elaborate hoax to try and generate new basic knowledge. Knefie (Dieter) tells it this way; "A Newton or Kant discovers a new island, and then the R&D people can build on it; but unless someone is is always discovering new islands, soon they have no place to build." *spoilers*

The mission then takes the turn to the bizarre: the crew starts to play around with the I-Ching, they tailor the drug that's supposed to control their sexual urges and ability to procreate into a mind altering hallucinogen, they start playing around with other states of consciousness, one of them even dies..but curiously doesn't...and well...shenanigans ensue.

If you've been buying and reading sci-fi anthologies from the past 20 years, chances are good that you've come across parts of this story, even those small parts are fun reads but I suggest you find a copy of this one as it is magnitudes more enjoyable as a whole. Compelling (at least for me) issues, like structure of language and communication, the nature of reality and consciousness, ethics of research, human evolution, causality, etc. are all present here, just don't expect a detailed yarn about each...just enough, I think, to get you to think.

0 comments Posted by cluelessvagrant at 11:40 AM

A novel by Frederick Pohl, it's centered around Lysander John William Washington. "Sandy" is apparently a human born and raised on an alien ship on it's way back to Earth from an orbit which took it all the way out to Alpha Centauri ( which reminds me to review Starburst later)

The aliens, in this case, are the Hakh'hli. Frog like bipeds, with a strict, regimented society, where the will and opinions of the Major Seniors are truth and law. The Hakh'hli, aside from having some of the funkiest names I've read in a while (ChinTekki-tho, Ceth'ik ti'Koli-kak, Hoh'My'ik perThara-tok 3151 - all sound like excerpts from some heavy-industrial-techno cra...I mean track), breed fast; freezing their eggs in vast freezers for eventual hatching, and specialize their society by breeding and gene altering individuals for specific tasks.

Sandy is part of a cohort altered and trained to be able to produce and understand human speech. The members of the cohort take their name from A Midsummer Night's Dream. They get to Earth with the express mission of spying out current Earth society, distribute gifts, aid the surviving people (more on that later), and generally recon... *spoilers*and prepare the Earth for eventual conquest, a part they left out from Sandy's knowledge. *spoilers*

Earth this time has gone through some tough times; Africa and a fair chunk of the "3rd world countries" have been wiped out by AIDS, the whole world is several degrees warmer thanks to pollution and the protracted effects of a nuclear war, the whole earth is girdled by shell of debris from centuries of space missions, the Star War or SDI, and the clutter of global tele-communications. Low lying cities are now underwater; what's left of New York has been relocated to New Jersey. there are no longer nations to speak off, just independent commonwealths trying to get by. Yet thankfully ( predictably, surprisingly, woefully) the apparatus of a global law enforcement force ( espionage and security) is still in place as the InterSec.

To make a long story short, Sandy saves the day, reconciles himself to his mixed heritage... *spoilers* and I mean mixed; the Hakh'hli rescued the cells from 2 dead male cosmonauts which they proceed to tailor and mix with the DNA from their (and Sandy's) major food animal, the hoo'hik, as spare parts even using a female hoo'hik as womb surrogate to the young Sandy.*spoilers*

All in all, a solidly good story. This is one of the more unique twists to the fish-out-of-water yarn I've read. There's some issues though (there always is);
1. Hakh'hli technology, metabolism, and reproductive rates as it is, they could have quite easily overrun the Earth without guile.
2. The use of strange-matter as propulsion and the part of it being self generating, i.e. the product of matter - strange matter interaction is energy and more strange matter sounds a bit iffy to me...but that's not from any technical know-how of particle physics on my part just the feeling that strange matter was latched onto the story just to produce the requisite obscure scientific soup (not that there's anything necessarily wrong in that...it just doesn't feel...kosher)
3. InterSec sounds like a global entity and I wonder if the world has need or the resources (and reason considering the drastic reduction of global population) to maintain such a group.
4. Africa is shown as wholly depopulated, again something that sounds iffy.
5. InterSec immediately jumps into action to welcome (and maintain surveillance on) the extraterrestrials...but it takes them till the very end to think of obtaining biological data from the visitors which I would think would be the requisite before any encounter.

...but don't let those (personal) issues turn you off, it's still a good read.

0 comments Posted by cluelessvagrant at 11:26 AM

Good day all. More on this later